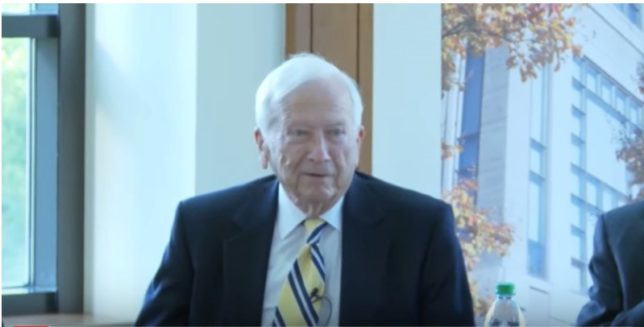 A new report published today in The Charlotte Observer reveals disturbing details about the funding source behind a number of activist groups waging an international campaign against renewable wood energy. A Future Forests + Jobs analysis finds that these activist groups have received more than $300 million from a North Carolina-based billionaire that is also bankrolling a number of known anti-immigrant hate groups.

The Charlotte Observer’s bombshell story details how the Foundation for the Carolinas (FFTC), with nearly $400 million in funding from billionaire Fred Stanback, has funneled some $20 million to anti-immigrant groups for years, including NumbersUSA, the Federation for American Immigration Reform (FAIR), and the Center for Immigration Studies (CIS), the latter two of which have been designated “hate groups” by the Southern Poverty Law Center. Meanwhile, the immigration advocacy group America’s Voice has stated that the cash from Stanback is “fueling violence” and “undermining the fabric of American communities,” and demanded the Foundation for the Carolinas stop funding these groups.

An analysis of federal tax disclosures by Future Forests + Jobs shows that while Stanback has bankrolled these hate groups, he has also concurrently donated hundreds of millions to a constellation of activist organizations engaged in a misinformation campaign against the renewable wood bioenergy industry.

The anti-bioenergy groups accepting cash from Stanback through FFTC include:

In total, Stanback has funneled more than $300 million to these organizations while also sending tens of millions to anti-immigrant “hate groups.”

“These organizations, which claim to fight for environmental justice and underserved communities, should be ashamed of themselves,” said Brian Rogers, Future Forests + Jobs spokesman. “Let’s be clear: The Dogwood Alliance, Southern Environmental Law Center, Bill McKibben, Dr. Mary Booth and others have taken hundreds of millions from an individual who at the same time has funded some of the most virulent anti-immigrant groups in America. For years, these activist organizations have failed to tell the truth about who is funding them, so it’s no surprise they’re engaged in a widespread misinformation campaign against bioenergy now. It’s past time to hold them accountable.”

Find a full breakdown of these Stanback/FFTC donations here.